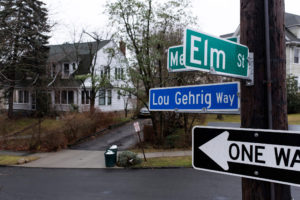 The Iron Horse had brass fixtures in his house. And galvanized steel wiring. He also had clapboard siding, parquet floors and a screened-in porch.

Lou Gehrig, the Yankee’s iconic first baseman, bought the home in New Rochelle, N.Y., in December 1927, just two months after completing one of the most successful seasons any major league hitter has ever had, culminating in a World Series title. He then refurbished the three-bedroom structure to accommodate both himself and his parents, taking great care to turn it into a place they would all feel proud to call home.

But today the old house, while still maintaining some of Gehrig’s handwork, sits cold and neglected, in search of a new owner.

Arthur Scinta, a local preservationist and architectural historian, hopes the house, 13 miles north of Yankee Stadium, can be restored and preserved in the style in which Gehrig fashioned it, perhaps even turned into a Lou Gehrig museum.

“You can still feel Gehrig’s presence in the house,” Scinta said. “It would be a shame if all that was lost.”

But the house, it turns out, also has a puzzling history – specifically, it was foreclosed on in 1937 while Gehrig’s parents, Christina and Heinrich, still owned it.

Gehrig bought the house, at 9 Meadow Lane, in his mother’s name, taking over an existing mortgage of $10,000, according to 1927 records. Gehrig and his parents then moved in shortly after Christmas, with Gehrig working hard to fix it up to his liking.

Gehrig, whose appearance in 2,130 consecutive games earned him the nickname the Iron Horse, is described in the Sun story as being covered in paint and plaster as he worked on the house. He lived there, with his parents, until he moved out in 1933 after marrying Eleanor Twitchell. In all, Gehrig won two World Series titles while residing at that address. Another local newspaper described him playing ball with local children across the street.

Continue to the full article.