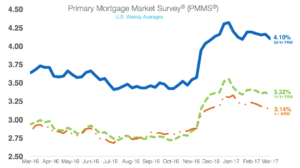 Mortgage rates broke their month-long holding pattern as they decreased this week, according to Freddie Mac’s Primary Mortgage Market Survey.

“Since the beginning of the year, the 10-year Treasury yield has covered a 22 basis-point range,” Freddie Mac Chief Economist Sean Becketti said. “The range of movement for the 30-year has been half that, just 11 basis points.”

The five-year Treasury-indexed hybrid adjustable-rate mortgage decreased slightly to 3.14%, down from 3.16% last week. This is up from 2.84% last year.