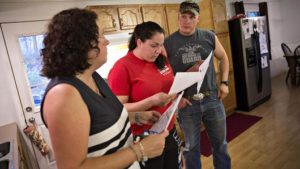 As interest rates surged last week and home prices continue to balloon at a breakneck pace, borrowers are wasting no time applying for home loans — they are hoping to get in before affordability gets even worse.

Total mortgage application volume rose a seasonally adjusted 3.3 percent last week from the previous week, according to the Mortgage Bankers Association. Volume remains 18 percent lower compared to the same week one year ago.

The weaker volume primarily stems from significantly fewer applications to refinance from a year ago, when interest rates were lower. Refinance volume is off 34 percent annually, but more borrowers rushed in last week, likely fearing rates would move even higher. Refinance volume was up 5 percent for the week, seasonally adjusted.

The average contract interest rate for 30-year fixed-rate mortgages with conforming loan balances of $424,100 or less increased to 4.36 percent from 4.30 percent, with points increasing to 0.44 from 0.38, including the origination fee, for 80 percent loan-to-value ratio loans.

Although mortgage rates do not directly follow the federal funds rate, a Fed rate hike could still make mortgages more expensive. After rising last week, mortgage rates have barely moved this week, which could be a sign of apprehension.

“Combine the past few days of limited movement with the bigger-picture post-election range, and there’s a sense that we’re waiting for a verdict about where we go next,” wrote Matthew Graham, chief operating officer of Mortgage News Daily. “[That] makes the next six business days scary. It’s ultimately next Wednesday that has the biggest potential to push rates higher or lower, but there’s plenty of room for volatility between now and then.”

Next Wednesday is when the Fed announces its decision on interest rates, and an increase is expected.

Mortgage applications to purchase a home, which are less sensitive to weekly rate moves, inched 2 percent higher for the week and are about 4 percent higher than a year ago. Homebuyer demand remains quite high, but there is still a shortage of affordable listings. Because much of the demand this spring is among young first-time buyers, the shortage is even more acute.