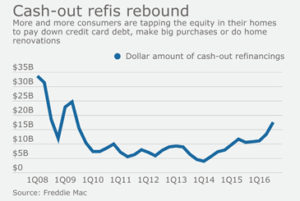 The surge in home values is good news for homeowners looking to tap the equity in their homes to pay down debt or make big purchases, but consumer advocates worry that it may be setting the stage for a spike in loan defaults.

Consumers have plenty of reasons to tap into their home equity, such as paying off credit card debt or financing long-delayed home-improvement projects. Banks are happy to oblige, especially with rising interest rates suppressing demand for traditional mortgage refinancing.

The problem is that a cash-out refi is much riskier than a credit card loan, said Sarah Wolff, a senior researcher at the Center for Responsible Lending.

“You are trading your unsecured debt for debt that’s tied to your home, and a default in that case would be much more catastrophic,” she said.

Banks are already seeing increased demand for cash-out refis. The total dollar amount of home equity cashed out rose 66% to $17.6 billion in the third quarter compared to the same period in 2015, according to Freddie Mac. The trend shows little sign of slowing down, said Len Kiefer, deputy chief economist at Freddie Mac.

Other lenders have placed bets recently that variations on the cash-out refinance model could catch fire with consumers. SoFi and Fannie Mae in November introduced a cash-out refi option specifically for paying down student loan debt.

Still, the overall industry level of cash-out refi volume remains at extremely low levels, even after a recent period of recovery, Kiefer said. The total dollar value of cash-out refis remained below $10 billion for several years during the recession. They have slowly inched back up, but remain well below pre-crisis levels of $30 billion and higher, so banks have plenty of capacity to lend, Kiefer said.

Interest rate shifts could also lead to more cash-out refis. The prime rate, which climbed to 3.75% in the fourth quarter, could continue to rise if the Federal Reserve proceeds with rate hikes. Credit card debt, largely based on the prime rate, could become more expensive and consumers could use cash-out refis to pay off those cards, Kiefer said.

That’s where the problems could surface for consumers, said the Center for Responsible Lending’s Wolff.

Total household debt rose 2.4% to $12.35 trillion in the third quarter compared to the same period in the previous year, according to the Center for Microeconomic Data at the Federal Reserve Bank of New York. Credit card debt, a portion of that total, rose 4.6% to $747 billion in the same period.