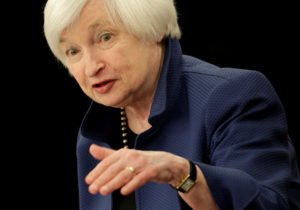 Odds of June rate hike jump to 90% after statement

The Federal Reserve on Wednesday left a key borrowing rate unchanged and dismissed a weak first quarter as temporary, signaling it is still on track to raise interest rates at gradual pace.

“The [Federal Open Market Committee] views the slowing in growth during the first quarter as likely to be transitory,” the statement said, in unusually dismissive language. Job gains were described as “solid,” as were the fundamentals underpinning the continued growth in consumer spending. Business fixed investment “firmed,” the central bank noted.

The decision leaves the benchmark short-term fed-funds rate in a range of 0.75% to 1%. The median forecast of Fed officials is for two additional quarter-point rate increases this year.

Investors who bet on the future path of the fed-funds rate project the next rate hike raised the odds of a move in June from 70% to 90%, Bostojancic said.

“On the whole, the statement was slightly more hawkish than we expected. On balance, we still think that the Fed will hike again in June,” agreed Paul Ashworth, chief U.S. economist at Capital Economics.

There were no dissents from the Fed’s updated policy statement.

Economic data show the U.S. economy got off to slow start in 2017 as Americans dialed back spending and companies reduced production to get inventories back in line.

Yet the economy has repeatedly picked up speed in the spring and summer, and Wednesday’s statement shows the central bankers expect the same pattern to recur.

Consumers and businesses are the most upbeat in year and early signs point to faster growth in the second quarter.

A string of higher inflation readings was also broken in March, a sign the economy had cooled off.