Fed on course to raise interest rates at an upcoming meeting: Yellen 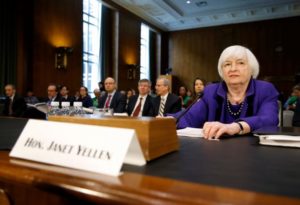 The Federal Reserve will likely need to raise interest rates at an upcoming meeting, Fed Chair Janet Yellen said on Tuesday, although she flagged considerable uncertainty over economic policy under the Trump administration.

Yellen said delaying rate increases could leave the Fed’s policymaking committee behind the curve and eventually lead it to hike rates quickly, which she said could cause a recession.

“Waiting too long to remove accommodation would be unwise,” Yellen told the U.S. Senate Banking Committee, citing the central bank’s expectations the job market will tighten further and that inflation would rise to 2 percent.

“At our upcoming meetings, the committee will evaluate whether employment and inflation are continuing to evolve in line with these expectations, in which case a further adjustment of the federal funds rate would likely be appropriate.”

Yellen did not say if Fed policymakers expected the economy would warrant three interest rate increases this year, as they last signaled in December. Nor did she give indications whether the first rate hike of the year might come at its next meeting in March or at the June meeting, which is when most analysts expect a rate increase.

“I can’t tell you which meeting it would be,” she said, including specifying “whether it’s March or May or June.”

Since the end of the 2007-09 recession, the Fed has raised rates once in December 2015 and again in December of last year.

Yellen added that Fed policymakers would be discussing in the coming months how the central bank will eventually reduce the size of its bond portfolio, which ballooned during the financial crisis as the Fed sought to keep rates low. She repeated the Fed’s guidance that reducing its holdings would begin when the Fed’s current cycle of rate hikes is well under way.

Yellen was appearing in Congress for the first time since Republicans took control of the White House and both houses of the legislature and she nodded to the uncertainties over the direction of U.S. economic policy.

“Changes in fiscal policy or other economic policies could potentially affect the economic outlook,” she said. “It is too early to know what policy changes will be put in place or how their economic effects will unfold.”