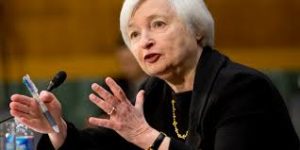 The Federal Reserve raised its benchmark interest rate Wednesday, launching into what investors expect to be a more rapid series of increases that will help ward off the threat of inflation but also raise costs for indebted American households.

“The simple message is the economy is doing well,” Fed Chair Janet L. Yellen said in a news conference after the announcement.

The Fed left its plan for interest rate increases essentially unchanged, expecting a total of three hikes this year and three more next year.

The Fed’s decision is meant to head off the prospect of rising inflation, which erodes savings and could destabilize the economy. But higher interest rates will also increase the payments made by Americans who borrow money to finance mortgages, auto loans and credit card purchases.

Some argue that, by raising rates too quickly, the Fed risks choking off progress for the poorest Americans just as they dig themselves out of the recession. But others say that a delay risks inflating asset bubbles in the market or letting inflation get out of hand — something market watchers call “falling behind the curve.”

“The Fed still has their foot on the monetary accelerator almost to the floorboard. They have to take that foot off,” said Steven Rick, chief economist at CUNA Mutual Group. “We’re concerned that maybe they are behind the curve.”

Economists have argued that higher rates could also frustrate the ambitious goals of the Trump administration, which aims to spur exports and boost the economy to growth rates not seen in years.

President Trump came into office with sweeping plans for the economy, including slashing corporate taxes, cutting regulations and boosting spending on infrastructure. If these policies materialize, they are likely to boost economic growth and spur inflation, potentially forcing the Fed to hike rates more quickly to keep up.