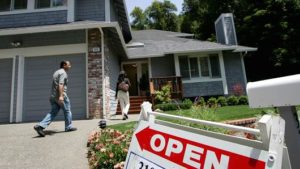 The gains are slow and small, but mortgage volume is beginning to improve again, as more homebuyers sign on the dotted line.

Total mortgage application volume increased 2.4 percent on a seasonally adjusted basis last week from the previous week. Volume is still nearly 14 percent below year-ago levels because of weaker refinancing, according to the Mortgage Bankers Association .

Even as buyers complain of high home prices and limited listings, mortgage applications to purchase a home gained 2 percent for the week and are 6 percent higher than a year ago.

“Continuing strength in the job market and improving consumer confidence drove overall purchase applications to increase last week,” said MBA economist Joel Kan. “The index for purchase applications reached its highest level since the beginning of October 2015, which was the week prior to the implementation of the federal government’s ‘know before you owe’ rule.”

That rule had lenders concerned that compliance would delay the mortgage process, which it did for a short time. Demand for mortgages was likely high just prior to its implementation, as buyers rushed to get in and avoid those delays.

Mortgage applications to refinance a home loan rose 3 percent for the week but are still 32 percent below last year, when interest rates were lower.

The average contract interest rate for 30-year fixed rate mortgages with conforming loan balances of $424,100 or less remained unchanged at 4.23 percent, with points decreasing to 0.31 from 0.32, including the origination fee, for 80 percent loan-to-value ratio loans.

Mortgage rates have been inching higher in general and have only moved lower on three out of the past 15 business days, according to Mortgage News Daily.

“While that sort of losing streak sounds fairly unpleasant, the size of the movement has been far from threatening,” said Matthew Graham, Mortgage News’ chief operating officer.