Mortgage rates tumble but may be headed back up 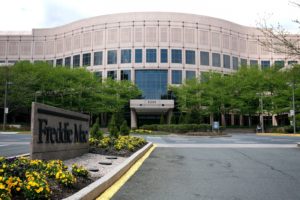 Mortgage rates fell for the third week in a row, but their downward trend may be short-lived.

According to the latest data released Thursday by Freddie Mac, the 30-year fixed-rate average tumbled to 4.1 percent with an average 0.5 point. (Points are fees paid to a lender equal to 1 percent of the loan amount.) It was 4.14 percent a week ago and 3.59 percent a year ago. The 30-year fixed rate has fallen 20 basis points in less than a month.

“After three straight weeks of declines, the 30-year mortgage rate is now barely above the 2017 low,” Sean Becketti, Freddie Mac chief economist, said in a statement. “Next week’s survey rate may be determined by Friday’s employment report and whether or not it can sustain the strength from earlier this year.”

The yield on the 10-year Treasury sank to 2.34 percent Wednesday, a drop of 28 basis points in less than three weeks. Since mortgage rates tend to follow the moment of long-term bonds, home loan rates also dipped.

But between the release of the Federal Reserve minutes Wednesday and Friday’s employment report, mortgage rates could be poised for a rebound. In the minutes of its March meeting released this week, the central bank indicated that it may begin to shrink its balance sheet. Since the economic downturn, the Fed has been buying mortgage-backed securities and has about $4.5 trillion in bonds. Investors have been wondering when it would begin shedding its holdings.

The last time the Fed signaled it was thinking about unwinding its bond-buying program, mortgage rates soared in what became known as the “taper tantrum.”