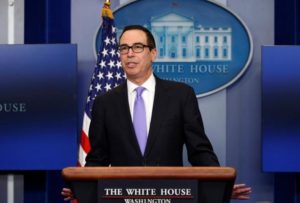 “Let me first clarify, we are not taking away the charitable deduction and we are leaving the mortgage interest deduction as is,” Mnuchin said in an interview on Fox Business Network.

“We think those are both very, very important. But what we are going to do is we are looking at other things where the reduction in deductions will offset the rate,” he said.

On Dec. 1, prior to President Donald Trump taking office, Mnuchin told CNBC that Trump wanted to cap the amount of mortgage interest that taxpayers can deduct.

The mortgage interest deduction is already capped at loans up to $1 million if you are married and filing income taxes jointly, and at $500,000 if you file separately.

Trump, in a speech to Congress on Tuesday night, said he wanted to provide “massive tax relief” to the middle class and cut corporate tax rates, but he did not offer specifics.

Mnuchin said he expects a tax reform plan to be passed by Congress and signed by the president by August.

Trump has said tax reform should reduce tax rates for individuals and businesses, do away with longstanding tax loopholes and broaden the tax base in order to drive U.S. economic growth.