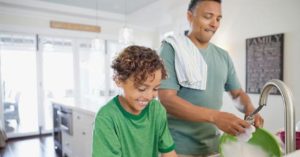 More than 1 in 3 mortgages has a “major impact” on the borrower’s ability to save. That number jumps to 51 percent for parents who have mortgages.

That’s according to Bankrate’s Money Pulse survey for February.

Asked, “How much of an impact does the size of your mortgage have on your ability to save money for the future?” 37 percent of respondents said their mortgage has a major impact. Another 46 percent said it has a minor impact on savings.

“It’s probably not as much about the mortgage as it is that stage of life,” says Jonathan Smoke, chief economist for Realtor.com.

Homeowners with children are likely to be in their early 30s to their mid-50s, with competing financial goals: Keeping the kids clothed and fed and educated, saving for college, saving for retirement, paying the mortgage, maintaining the home.

Jim Sahnger, mortgage planner for Schaffer Mortgage in Palm Beach Gardens, Florida, recommends thinking of a mortgage payment as a form of savings.

“If you look at it from the aspect of you’re building equity, that’s obviously important,” he says.

Homeownership also shelters you from rent hikes and it might convey tax benefits, he says.

Other results from the survey:

Who is very or somewhat likely to buy a home this year? Here’s the age breakdown:

This doesn’t surprise Smoke at all. The dominant homebuying segment is people ages 25 to 34.

Regardless of generational labels, “if you had history going back 50 years, you would see this pattern is true in both good times and bad,” Smoke says.

People often buy their first homes shortly before or after children are born.

When he and his wife bought their first house, “I was 29 when we closed and not even a year back from my first deployment to Iraq. I was married to Andrea and we were pregnant with our first baby girl at the time. All three of our kids were born while we lived in that home since we lived there for six years.”

They sold that house in Salem, Oregon, a couple of years ago, and just bought a town house in Portland, Oregon.