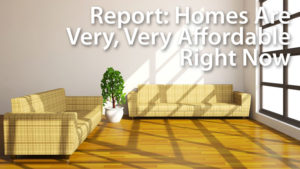 Home Prices: Not As High As You Think

Home values are rising, and have now surpassed their pre-recession peak.

Unfortunately, that’s scaring some homebuyers away.

If home prices are that high, the logic goes, they’re either overpriced or we’re headed for another downturn.

But according to a new study, “real” home prices are actually still more than 30% lower than they were at the height of the housing boom last decade.

That’s because a number of factors — low interest rates, inflation, and strong income growth — make it as affordable to own a home as it was in 2009.

It’s still a fantastic time to be looking for a first home.

It’s a different kind of index because it measures more than just raw dollars.

Most reports — such as the FHFA House Price Index and Case-Shiller — measure average home prices, not adjusted for inflation an not taking into account current mortgage rates.

The RHPI includes these elements, plus kicks in wage growth to determine home affordability on a historical scale.

Results from the most recent report were surprising.

“Real” home prices are nowhere near their peak in 2006, according to the index. In fact, homes are 33.1% more affordable than they were more than ten years ago.

To the everyday home shopper, it may not feel like home prices are that low. After all, prices have risen by about one-third since 2012 and show no signs of slowing down.

But other elements are seriously pushing up affordability.

Mortgage rates are still incredibly low from a historical perspective. In 2006, the 30-year mortgage rate averaged 6.41%. Compare that to today’s rates in the low fours.

And, wages are much higher now.

According to the Bureau of Labor Statistics, hourly wages in the U.S. averaged just over $20 in 2006. That has since jumped thirty percent to $26. What you make has a lot to do with your buying power.

In all, yes, home prices are nominally higher than they were before the housing downturn. But affordability has rarely been better than it is right now.