The U.S. Economy Is Back on Track 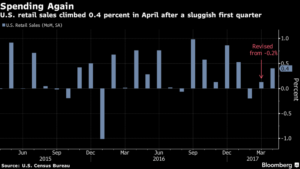 The U.S. economy is back on track for steady growth, though not much more.

Data released Friday showed consumer retail purchases rose last month, albeit less than forecast, after a March gain that was revised from a decline, indicating the early-2017 slowdown was transitory. The consumer-price index stabilized in April following the first drop in a year, though a gauge excluding food and energy posted the smallest year-over-year increase since October 2015.

The pickup in retail sales — with gains in nine of 13 major categories — eases concern from earlier in the year about a loss of momentum in household spending, the biggest part of the economy. The CPI results are a reminder that while businesses are regaining some pricing power, inflation is hardly breaking out.

Together, the data indicate progress consistent with the Federal Reserve’s view of the economy and inflation ahead of policy makers’ mid-June meeting, where they are widely expected to continue their gradual pace of interest-rate increases with a quarter-point hike. The Fed may feel less pressure, however, to pick up the pace should core inflation remain subdued.

“It’s a pretty decent overall picture of the U.S. economy,” said Sal Guatieri, a senior economist at BMO Capital Markets in Toronto. “Consumer spending is rebounding, though possibly not as much as we expected. On the inflation front, there’s not a lot of pricing pressure, and it looks like inflation is gravitating toward the Fed’s goal.”

A separate report showed that the University of Michigan consumer confidence index climbed to a four-month high in May, and within that, buying conditions for large household durables rose to the highest since 2005, reinforcing signs that Americans remain optimistic about spending.

“Today’s sub-consensus U.S. data is unlikely to rock the Fed’s boat, meaning there are increasingly few reasons for not hiking in June,” James Smith, an economist at ING in London, wrote in a note.