U.S. mortgage payments as a share of income just hit a 7-year high 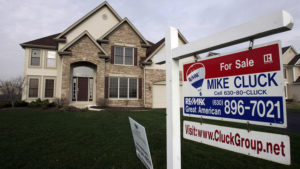 Mortgage payments make up the biggest chunk of U.S. homeowners’ income since 2010.

The average monthly mortgage payment made up 15.8% of buyers’ income in the fourth quarter of last year, according to real estate website Zillow, the biggest share of homeowner income since the second quarter of 2010, thanks to rising interest rates and increasing home values. The average monthly payment was $758 at the end of last year, up from $690 in 2015. Though it’s still not quite as bad as the national average of 21% between 1985 to 2000. “This is a phenomenon that really affects homebuyers a whole lot more,” said Svenja Gudell, chief economist at Zillow.

Affording a house will get a lot harder next year, and because banks have tightened restrictions on mortgage lending, some people aren’t even trying to apply for mortgages. People with low credit scores are especially at a disadvantage, as lenders have tougher expectations for borrowers to meet — the third quarter of 2016 saw the highest quality home loans since 2000, but that means those applying must have stellar credit scores (the average for loans originating in the third quarter of last year was 739).

But it could be worse, and in some cities, it is. Coastal cities see even higher shares of their income go toward their mortgages. In New York, for example, homeowners spent 27% of their income on their mortgage payments, and in San Francisco, it was more than 42%. There is one bright spot for those who have already bought homes: Current homeowners would obviously only be affected by rising interest rates if they chose an adjustable-rate mortgage, which fluctuates as opposed to a fixed-rate, Gudell said.

In general, the rule of thumb for buying a home is to spend no more than three times your income — so if you make $100,000, you should look for a house that costs about $300,000, Gudell said. It’s a rough estimate, and likely doesn’t apply to homes on the country’s coasts, in places like Los Angeles and New York.

Your monthly housing payment, including your principal, interest, taxes, insurance and in co-op and condo situations, home association fees, should not take up more than 28% of your salary before taxes, according to estimates by personal finance site Bankrate.com.