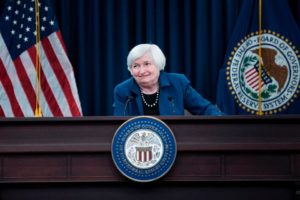 At its March meeting, the Federal Reserve raised interest rates by 0.25%. In doing so, it hiked rates for only the third time since 2006. However, in a strange turn of events, the Fed’s move was perceived as a dovish one by the markets.

That’s because even with inflation at its highest level since 2012, the Fed said monetary policy will remain accommodative “for some time.” As has been the case in the past, the Fed is willing to let inflation consolidate above its 2% target before embarking on a more aggressive tightening path.

This willingness to let inflation “run hot” means even as nominal rates rise, real rates—that is, the nominal interest rate minus inflation—are headed into negative territory.

So what are the implications of negative real rates?

The consumer price index (CPI), the most widely used measure of inflation, averaged 2.67% for the first two months of the year. Even if inflation averaged only 2% for all of 2017—the Fed’s target—it would be a big problem for investors and savers alike.

Today, a one-year bank CD pays about 1.4%. Therefore, anyone who keeps their money in a bank is watching their purchasing power erode.

Of course, there are other options. You can put your money in U.S. Treasuries or dividend-paying stocks—both popular sources of fixed income.

However, with both the 10-year Treasury yield and the average dividend yield for a company on the S&P 500 hovering around 2.35%, that doesn’t leave much in the way of real gains if inflation is running at 2% per annum.

If inflation rises or bond yields fall, real interest rates will be pushed into the red… and that’s very bullish for gold.

Gold is known as the yellow metal with no yield, but simple math tells us no yield is better than a negative one. Because of this, gold has done well when real rates are in negative territory. In fact, real US interest rates are a major determinate of which direction the price of gold moves in.

A study from the National Bureau of Economic Research found that from 1997–2012, the correlation between real U.S. interest rates and the gold price was -0.82.

This means as real rates rise, the price of gold falls and vice versa. A -1.0 reading would be a perfect negative correlation, so this is a tight relationship.